VBADOS is a set of Terminate-and-Stay-Resident (TSR) utilities to be used inside MS-DOS virtual machines (and Windows 3.x), and help to provide closer integration between the guest and the host.

There are two utilities right now:

Note: this project has absolutely no official relation with either VirtualBox or Visual Basic. The VB stands for "Very Basic" :)

The current release is 0.56. You can get a recent build from the ready-to-go floppy disk image:

Alternatively, here is a .zip containing all binaries:

Older versions may be archived here. For the source code, you can check out this git repository.

VBMOUSE.EXE is a DOS mouse driver as a TSR written in C and compilable using OpenWatcom C. It is primarily designed to work with the VirtualBox emulated mouse, but also supports real PS/2 mice as well as the VMware virtual mouse. Being in C, it is not going to stand out in either compatibility, performance, or memory usage; but hoping it is at least a bit easier to hack on, for experimentation.

I tried to keep it working on real hardware as an exercise. It requires at a very minimum a 386, but probably needs something a bit beefier to be useful, since the rendering routines are going to be much slower than an assembly-optimized driver. Note also that it does not support serial mice or anything other than PS/2. For older PCs, serial mice, or, to be honest, for real hardware overall, CuteMouse is still the best choice and hard to beat.

Like any other DOS mouse driver, it partially supports the MS Mouse API (int 33h), and has the following additional features:

A very simple Windows 3.x mouse driver (called VBMOUSE.DRV) is also included, which requires VBMOUSE.EXE to be loaded before starting Windows , and uses its functionality to provide similar host/guest mouse integration inside Windows 3.x itself (i.e. not just DOS boxes).

To install this driver, and assuming you have for example already inserted the VBADOS.flp floppy (or copied the files in some other way), use the Windows Setup program (accessible either via SETUP.EXE on an installed Windows or via the corresponding icon in Program Manager). 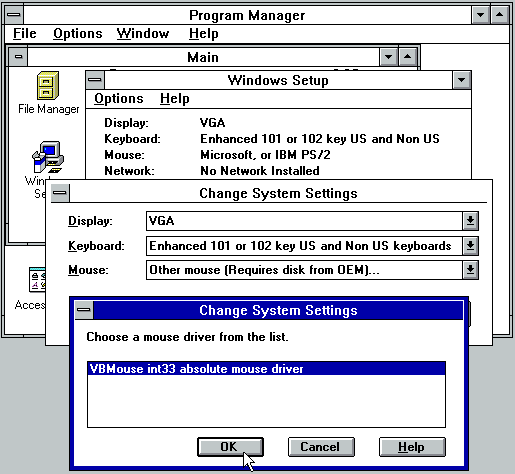 If the "Mouse" option becomes empty after doing this, just select "VBMouse int33 absolute mouse driver" which will now appear in the same list (instead of "Other mouse (requires disk)").

If your primary goal is Windows 3.x and you do not want to be forced to use VBMOUSE.EXE as DOS mouse driver, you may be interested in "standalone" Windows 3.x mouse drivers. E.g, for either VirtualBox or VMware.

You can also use VBMOUSE.DRV with any other int33 mouse driver, however to use absolute positioning (e.g. under DOSBox-X or DOSemu), the int33 driver needs to support my absolute int33 API extension bit. Otherwise the driver will only pass relative coordinates (i.e. without SF_ABSOLUTE bit).

VBSF.EXE allows you to mount VirtualBox shared folders as drive letters. It is an "MS-DOS network redirector", so the new letters behave as network drives, not real drives.

Most redirector functionality is supported, including write support, except changing file attributes (like setting a file to read-only...). The drives can also be accessed from within Windows 3.x .

It uses around 10KiB of memory, and auto-installs to an UMB if available. This is still much less memory than a SMB client and network stack! 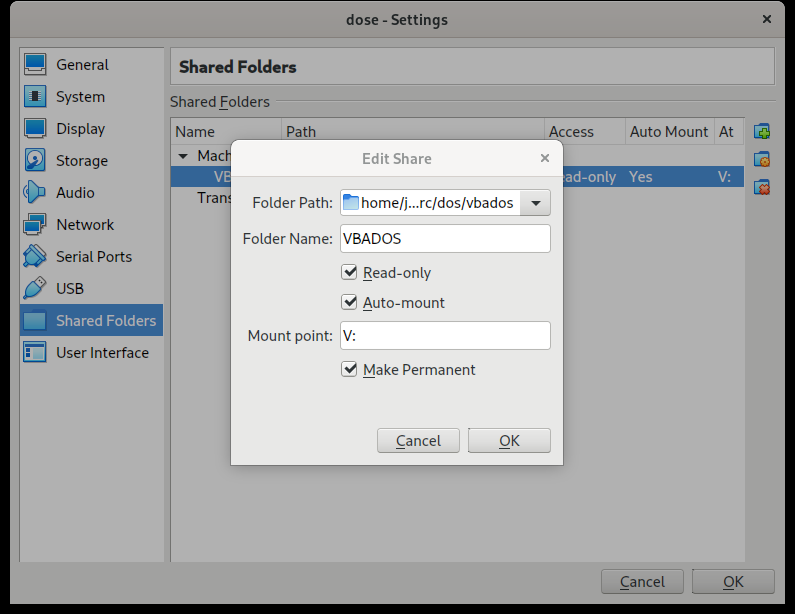 Second, remember to add LASTDRIVE=Z to your CONFIG.SYS!

Third, to install the driver, just run vbsf. The driver will automatically mount all the directories marked as "Automount". 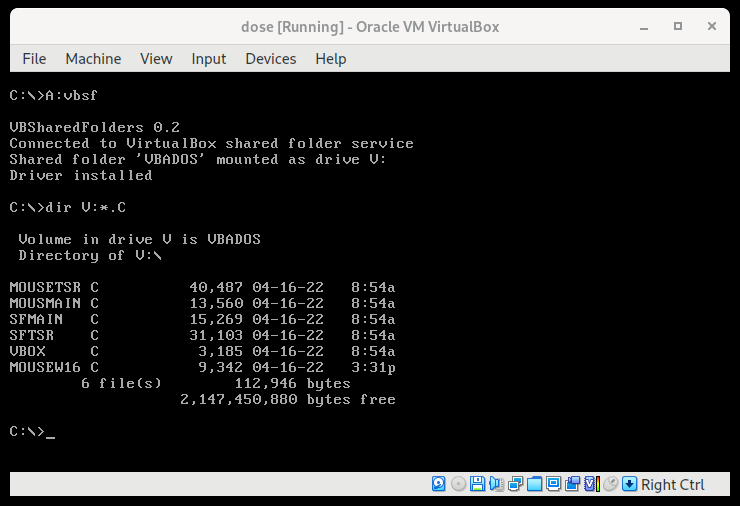 The driver supports the following actions, too:

Note that there is NO Long File Name support. This means that all the files in the shared directory must be 8.3 characters long or shorter. Files with long files will just not appear in the directory listings and therefore cause misterious failures (they will be skipped when copying directories, and DOS will not be able to delete directories containing such files).

Also, there is absolutely NO support for mapping filenames to a specific codepage. Please limit yourself to plain ASCII filenames or you will quickly see gibberish in DOS. No spaces, accents or tildes!

To see proper modification dates & times in directory listings in DOS, you need to set the TZ (timezone) environment variable before loading VBSF.EXE. Please see the OpenWatcom documentation for the syntax of the TZ variable.

For example, if your local timezone is 8 hours earlier than UTC (e.g. PST), run set TZ=PST8.

This requires OpenWatcom 2.0 to build, and I have only tried with the latest (March 2022) snapshot, albeit it may likely work with older versions, starting from 1.9.

I have tested building it on a Linux host as well as building on MS-DOS itself (with the source code being on a VBSF shared folder :) ).

The included makefile is a wmake makefile. To build it just enter the OpenWatcom environment and run wmake flp. This will create a floppy image containing vbmouse.exe, vbsf.exe plus the Windows 3.x driver (oemsetup.inf and vbmouse.drv).

VBSF is a "MS-DOS network redirector" of which there are not many free implementations at all. The only one I'm aware of the Phantom sample code, from the Undocumented DOS book, and EtherDFS, which is also in Watcom C. EtherDFS leaves most of the actual logic to the server code (running on the host), so the DOS part is much more efficient.

You will notice that most auxiliary functions are in .h files. This is due to laziness on my part. While most of the time these auxiliary functions are only used by one tool and one segment (i.e. the resident part uses it but not the transient part), sometimes I need the same function in different segments/binaries. The only way to do that is to build the multiple file several times with different settings. To avoid that and the resulting makefile complications, I just put all auxiliary functions directly in the header files.

If the wheelkey feature is in use, and to avoid sending wheel events twice (once as a fake key press, once as a wheel API event), this API will not be enabled until the first int33 ax=11h call (check wheel support), after which wheel events will only be sent through the wheel API until the next driver reset.

There is a very simple extension of the int33 protocol to let clients know whether the incoming coordinates come from an absolute device (like the VirtualBox integration) or from a relative device (like a real PS/2 mouse or when the integration is disabled):

When the int33 user interrupt routine is called, bit 8 of CX indicates that the x, y coordinates passed in CX, DX come from an absolute pointing device (and therefore that the mickey counts in SI, DI may be zero or virtualized).

Note that the range of coordinates is still defined as in a traditional int33 driver, i.e. the size of the screen unless a larger range is defined via int33 ax=7/8.

The rationale for this extension is that for many types of simulated mouse it is possible to switch between absolute and relative position. E.g. on VirtualBox you can disable the integration, on VMware you can enable "game mode", on DOSBox you can lock/unlock the mouse, etc. This information is not forwarded to the users of the int33 interface; this extension fixes that.

The included Win3.x driver uses this API to decide whether to forward the absolute OR relative coordinates to Windows, so that one can use the same driver for both types of mouse input without loss of functionality in either case.

The VirtualBox guest integration presents itself as a PCI device to the guest. Thanks to the BIOS, the device is already pre-configured. The driver uses the real-mode PCI BIOS to request the current configuration of this PCI device. To communicate with the host, the guest must send the PCI device the (physical) address of a buffer containing commands to be sent to the host. The host will write back the response in the same buffer. Further details are available in OSDev.

When VirtualBox is told that the guest wants absolute mouse information, VirtualBox will stop sending mouse motion information via the PS/2 mouse. However, the PS/2 controller will still send interrupts whenever mouse motion happens, and it will still report mouse button presses. In fact, the only way to obtain mouse button presses (and wheel movement) is still through the PS/2 controller.

Under Windows, the special vbmouse.drv that you should have already installed takes care of making Windows listen to mouse events coming from the DOS driver (vbmouse.exe).

However, the story is slightly different when running Windows in 386 enhanced mode. In this mode, Windows is actually virtualizing the PS/2 hardware in order to share it between different DOS applications (each running in its own VM) and the "system VM" which contains all Windows applications and Windows drivers.

This means that, effectively, under Win386 the DOS mouse driver is running under the virtualized PS/2 hardware. If you are using the vbmouse.drv, the DOS mouse driver then forwards back the information back to Windows. So the entire situation is a bit confusing. Mouse events go through several layers. For example, if using vbmouse.exe+vbmouse.drv, and running a Windows application, the path looks as follows:

This is actually similarly complex even if you use the native PS/2 drivers from Windows; you just skip steps 5 & 6.

When you use a DOS application fullscreen, starting from step 2, the callback is delivered to another VM, the one where your DOS application is running in. This VM will have its own DOS mouse driver running which may (or may not) forward the data to the DOS application.

A windowed DOS application behaves more like a Windows app; in this case, at step 8, Windows realizes the window is a DOS window and calls the DOS mouse driver inside that DOS VM with a special hook.

There are a couple of integrations/hooks that are necessary for proper integration of the DOS mouse driver with Windows so that this entire dance works.

See int2fwin.h for details on these hooks, and/or grep for the macro USE_WIN386.

Unfortunately, VKD's PS/2 emulation/virtualization is incomplete and will not forward special commands to the real mouse. This means we cannot configure the PS/2 mouse to support scroll wheel mouse operation when running inside Windows/386. Not even the Windows mouse driver itself can, since it will also run inside VKD's emulation.

One solution is to patch VKD. Fortunately, the source of VKD.386 is on the Windows 3.1 DDK.

Here is a patch to the VKD source code. It is really a very simple patch that will break any non-wheel aware mouse driver. It makes VKD set the mouse to "Intellimouse"/4-byte packet mode unconditionally at startup, returns the wheel mouse device ID whenever asked, and removes all the packet segmentation code. Meaning overflow conditions may not be handled gracefully, dropping bytes randomly, so the DOS driver may need some synchronization code itself. However the code was not that functional to begin with, so not much of value is lost. The 4-byte packets is what breaks most other drivers, but when using vbmouse.exe+vbmouse.drv, this shouldn't be a problem either.